Help us in Serving Humanity 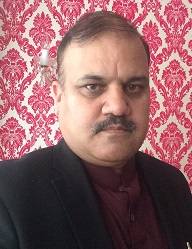 Shamim Khan is founder and Director of Help The Humanity Organisation.  It is a non-profit and non-government organisation which was founded on 1st April, 2021 in Rochdale, United Kingdom.  It is organised to raise funds through public and private sources worldwide. The uses of the funds will be to fund charitable education initiatives to meet the basic educational needs of the poor children in rural areas of Azad Kashmir, Pakistan.  The major goal of the organisation is to support for general welfare and to protect vulnerable children, girls and women from sexual abuse in Azad Kashmir, Pakistan.

Shamim was born in some of the most deprived area in Azad Kashmir Pakistan.  Shamim’s village Mian Mohammad Town is situated in Mirpur Azad Kashmir and did not have supply of fresh water, electricity, gas, medical centre or ambulance service.  At that time there was only one primary school for boys, so each morning he set off on his journey to a neighbouring city so he could go to school.  At the age of eight years Shamim walked more than 4 Kilometres every day so he could receive basic education. Not only was the journey hot and dusty, it was filled with fear. At such a young age, Shamim had no idea who – or what – he would encounter on the way to school, something he believe no child should experience. Something he does not want other children to encounter, but Shamim was one of the lucky ones; while not from a rich family, were not steeped in poverty. Shamim was able to do extremely well in his studies; always secured top positions in almost all his exams.

In 1986, Shamim migrated to the United Kingdom and started his employment with Royal Mail Group in Manchester.  In 1989, Shamim become member of Oldham Law Centre and completed his magistrates training course in Brighton, United Kingdom.  Shamim completed many comprehensive training courses/programmes like, Health & Safety, City & Guilds in Mail Operations, Royal Mail Management, Safety for Managers, Certificate in Training & Development, Driver certificate of professional competence, Emergency First Aid at work, SIA Officer, Certificate in International law, Certificate in International Politics and Certificate in Safeguarding children, Mental Wellbeing in children and Young People Certificate to build his career in the public service in the United Kingdom.  Shamim also knew that, being a British Citizen Muslim, he wanted to give something back to his community where he originally belonged. So Shamim decided to set up a charity for general welfare and to protect vulnerable children, girls and women from sexual abuse in Azad Kashmir, Pakistan.

Thousands of cities in hundreds of countries there are children living in object poverty on the streets.  With no family to care for them, these children face a daily battle for survival and are vulnerable to exploitation and physical, psychological and sexual abuse.  The constant perils of the streets force them to grow up too fast, with no chance to play, laugh, love and just be children.  Millions of children around the world are deprived of the basic access to education, which has a severe impact on their lives.

A fact long-hidden in Pakistan, shrouded in the silence of stigma, is now official. A government report has found that child sexual abuse is disturbingly common in Pakistan, with 141 cases reported in the city of Lahore alone since January 2018. Police say that at least 77 girls and 79 boys were raped or sexually assaulted. The report found that none of the suspects had yet been convicted. That’s sadly unsurprising given that the criminal justice system in Pakistan, from the time police receive a complaint until trials are completed, is not fit for credibly and expeditiously investigating crimes, and fairly prosecuting those responsible. Poorly trained police often refuse to register complaints or investigate. Instead, they subject the victim to mistreatment and humiliation. And nowhere is this more obvious than in cases of sexual assault.

Several child rape cases have shocked Pakistan in recent months, including the rape and murder of 7-year-old Zainab Ansari in Kasur, Lahore, Punjab province, whose body was dumped in a pile of garbage. the rape and murder of a 5-year-old girl in Mardan, Khyber Pakhtunkhwa province, and the rape of a 6-year-old girl in Sukkur, Sindh province. But instead of improving protection services and initiating criminal justice system reforms, authorities are promoting populist measures, like pursuing the death penalty or even public executions.

That will not solve the problem. For example, the Supreme Court upheld the conviction of Imran Ali, who was charged with the rape and murder of seven years old Zainab Ansari and further at least nine girls. He was able to carry out his crime spree for so long because the police had failed to act promptly on previous complaints against him. An average of 11 cases of child sexual abuse are reported daily across Pakistan, but only a tiny proportion of such crimes are ever reported to the police, mainly for fear that child survivors will not be treated sympathetically. The government of Pakistan should do better and provide more training and resources to ensure that the police, doctors, court officials, social workers, and child welfare authorities respond properly to allegations of child sexual abuse. Azad Kashmir and Pakistan’s children deserve a safe childhood. Child sex abuse is not inevitable. A strong public and government response can mean the difference between life and death for little ones who deserve our protection. The heavy burden of little coffins needs to end.

Shamim believes that education is the best way to empower children, especially girls, with the tools, knowledge, strength and confidence they need to promote and protect their own rights, growth and self- sufficiency.  With education, children, families, communities and even nations can break the cycle of poverty.

Help The Humanity.org particularly focus on improving access to education to girls, orphans and children from poor families.  Millions of women and girls living in the developing world do not have access to these basic rights.  By removing the barriers to education, we can help girls prepare for the future, training women to have the skills they need to build better lives for themselves, their families and communities. Education plays an important role in political stability, economic development and social progress of a nation.  It brings political stability by realising the people their national rights and duties and thus through awareness of their rights and duties, a very good environment is created for better implementation of the policies and good participation and cooperation of the people.

Shamim continue to be driven by his early life experiences and to work tirelessly towards his vision of a world where poverty and suffering have been overcome and children are given the chance to grow up and live in dignity, independence and freedom. Shamim very much hopes to share his passion for a fairer world, and that you will support to Help The Humanity Organisation now and in the future. Thank you

Our mission statement “Serving Humanity to Eradicate Poverty, Hunger and Social Injustice” tells the story of our services.

We are driven by the urgency to serve people across all territorial and religious borders. We rise to the needs of a suffering humanity to end their hunger and poverty. Where there is a vulnerable community suffering from impoverished conditions, we are there with our help. Humanity Help commits itself to mobilize global resources to help secure sustainable futures rather than provide onetime help. All this, while upholding the brightness and values of the Islamic culture.

Inspired by the values of our faith, Help the Humanity Organisation is working towards tackling the root causes of poverty and creating a fairer world for everyone. We believe that every human being has the right to an education, access to clean water and food and the means to support themselves, their family and their community.

At Help the Humanity Organisation, we provide an impartial, efficient and wholly transparent service that ensures your donations reach the people that really need them.